Canada's Forest Inventory is a compilation of the most recent information on the extent and state of Canada's forest resources. It is based on existing provincial and territorial forest inventories and satellite imagery, and is revised periodically to reflect the most recent data available. Canada's Forest Inventory 2001 (CanFI2001) is based on contributions from federal, provincial and territorial government agencies. It is stored in a relational database and geographic information system that provides statistical reporting, mapping and spatial-analysis capabilities. CanFI2001 replaces Canada's Forest Inventory 1991: The 1994 Version (CanFI1991).
The 2001 National Forest Inventory includes a revised land classification, an expanded species list, expanded coverage to include the entire land mass of Canada and an estimation of forest biomass.
This report represents a summary of data available. 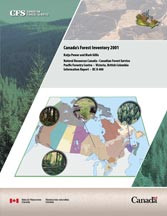