Message from the Minister

British Columbia is experiencing a mountain pine beetle outbreak beyond any beetle epidemic recorded in North American history. This infestation is killing unprecedented numbers of lodgepole pine, the province’s most abundant commercial tree species. It is also threatening the well-being of about 180 B.C. communities.

Over one year ago, after witnessing the effects of the mountain pine beetle, Prime Minister Stephen Harper made a commitment of $1 billion over ten years to address the infestation. This is the largest commitment ever made by any government. It will ensure that sufficient resources are in place to deal with this epidemic.

In our first budget, we began delivering on this commitment. In January 2007, I unveiled the Mountain Pine Beetle Program, a $200-million investment for controlling the spread of the beetle and improving economic infrastructure in key regions in B.C. In addition to the important science work underway, it is a priority for our Government to ensure that communities facing economic challenges caused by beetle infestation remain strong, healthy and safe. 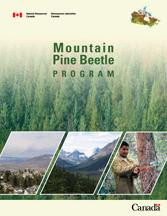