Epidemics of the mountain pine beetle Dendroctonus ponderosae Hopkins have occurred within the pine forests of western North America four times during the last century. Considerable resources have been directed toward suppression of populations due to the extensive tree mortality associated with outbreaks. However, management efforts have been largely unsuccessful. A framework for successful control based on simple population processes is proposed and used to evaluate past management efforts. The compounding effects of increasingly susceptible forests due to climate change and the legacy of forest fire suppression are discussed. Due to the increase in the amount of susceptible pine, the mountain pine beetle epidemic that began in the 1990s has spread over nine million hectares. Because of its size, control efforts against the present major outbreak are largely irrelevant. However, a swift and aggressive area-wide control strategy is required to limit the spread of isolated populations east of the Rocky Mountains. This strategy must integrate advances in remote sensing technology that permit the earliest possible detection of small incipient epidemic infestations with novel forms of direct control and aggressive sanitation harvesting. In the long term, mitigation of impacts will only be possible through the area-wide management of the amount of susceptible pine. 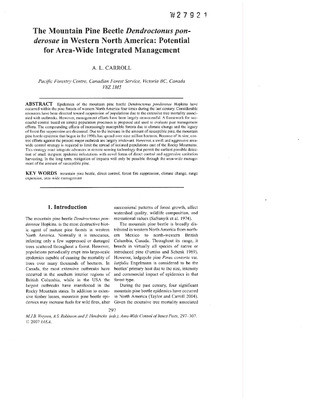