Conditions influencing infection of artificially injured balsam fir (Abies balsamea (L.) Mill.) by Stereum sanguinolentum (Alb. & Schw. ex Fr.) Fr. were studied over a 3-year period in Quebec. Optimal conditions for spore dispersal and germination occurred during extended periods of high relative humidity and when mean daily temperatures were between 45 and 75 F (7 and 24 C). Optimal conditions for infection of both decapitated living trees and freshly excised stem sections occurred during periods of rain and when mean daily temperatures were between 45 and 55 F (7 and 13 C). Susceptibility of wound surfaces to S. sanguinolentum varied under different environmental conditions; it fell off rapidly, and irreversibly, after a few days of exposure to high summer temperatures. Intense competition for the wound surface at temperatures above 60 F (15.5 C) by such fungi as Peniophora cinerea (Pers. ex Fr.) Cooke, Alternaria tenuis auct. sensu Wiltshire, and Ceratocystis piceae (Münch) Bakshi was the main factor limiting the period of susceptibility. Experimental evidence suggests that dominance by S. sanguinolentum of the fresh-wound surface is due to the relative inability of competitors to tolerate certain substrate properties, particularly at low temperatures. Modification of the substrate, either by addition of malt extract solution, or by excision of the injured part (or by natural death) favored saprophytic competition which suppressed the pathogen. 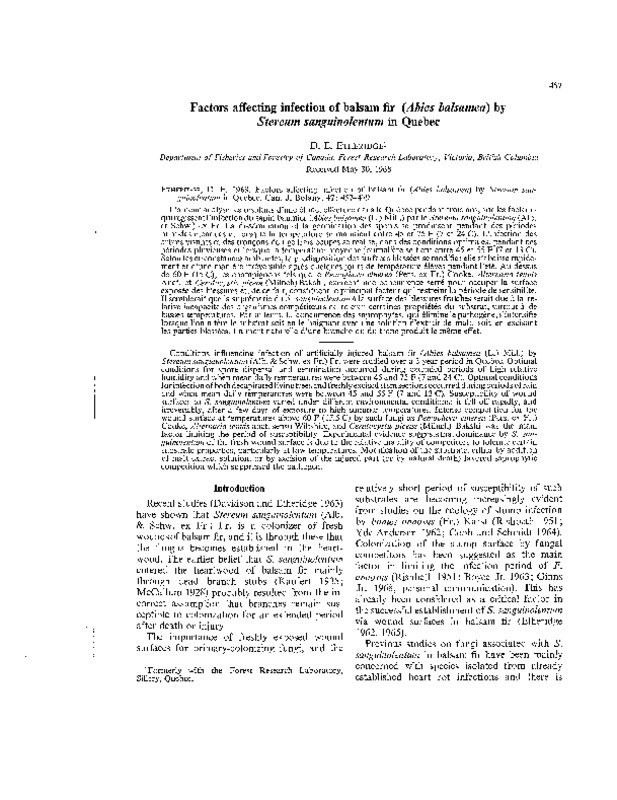