To understand how boreal forest carbon (C) dynamics might respond to anticipated climatic changes, we must consider two important processes. First, projected climatic changes are expected to increase the frequency of fire and other natural disturbances that would change the forest age-class structure and reduce forest C stocks at the landscape level. Second, global change may result in increased net primary production (NPP). Could higher NPP offset anticipated C losses resulting from increased disturbances? We used the Carbon Budget Model of the Canadian Forest Sector to simulate rate changes in disturbance, growth and decomposition on a hypothetical boreal forest landscape and to explore the impacts of these changes on landscape-level forest C budgets. We found that significant increases in net ecosystem production (NEP) would be required to balance C losses from increased natural disturbance rates. Moreover, increases in NEP would have to be sustained over several decades and be widespread across the landscape. Increased NEP can only be realized when NPP is enhanced relative to heterotrophic respiration. This study indicates that boreal forest C stocks may decline as a result of climate change because it would be difficult for enhanced growth to offset C losses resulting from anticipated increases in disturbances. 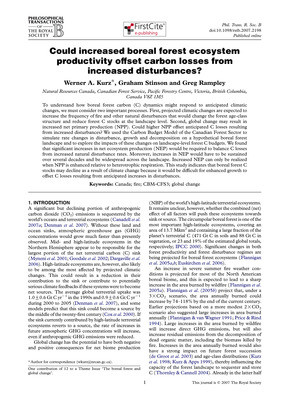