Three outbreaks of western spruce budworm were recorded on southern Vancouver Island between 1909 and 1930. After 1930, outbreaks were restricted to interior regions of British Columbia. We show that warming winter temperatures on southern Vancouver Island, related to warming sea temperature, promoted earlier larval emergence while the timing of bud flush has remained constant. This differential response to changed climate has resulted in a significant departure from optimal phenological synchronization that would explain the outbreak history. 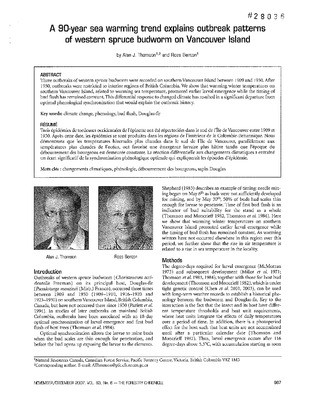