Radial variation in wood density was investigated for 1225 trees at 39 months in a provenance/progeny test of Calycophyllum spruceanum (Benth.) Hook. f. ex Shum. The test was established in three planting zones located in one watershed in the Peruvian Amazon. Air-dry density was measured by X-ray densitometry from pith to bark on slices of wood sampled from the south-facing direction of the stem. Density increased significantly from pith to bark in all planting zones. The difference in density between the pith and bark was larger in the zones where trees grew more rapidly, and for trees with faster growth. Phenotypic correlations also suggested that selecting faster-growing trees would result in less homogeneous wood density. This could lead to radial gradients in other properties that are correlated with density. Results are compared with other tropical hardwoods, and some practical implications are discussed. 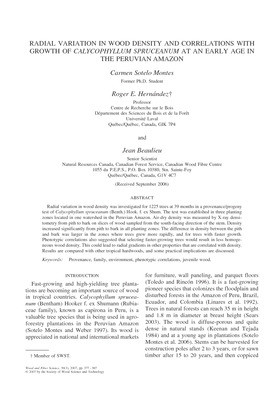