Calycophyllum spruceanum (Benth.) Hook. f. ex K. Shum. is an important timber-tree species in the Peruvian Amazon Basin. Markets currently prefer wood with a uniform, light yellow color, but these preferences may change in the future. As farmers and industry commonly use wood from young trees, it is important to investigate genetic and environmental variation in juvenile-wood properties to assess whether tree improvement programs could make adjustments to changing preferences. A provenance/progeny test was established to evaluate genetic variation in growth and wood properties of young trees, the strength of their genetic control as well as their interrelationships both at the genetic and the phenotypic level in different planting zones. This paper presents analyses of variation in wood color at 39 months, and their correlations with tree growth and wood basic density. CIELab means for lightness ranging from black to white (L), green to red hues (a* ) and blue to yellow hues (b* ) were 67.63, 5.34 and 22.12, respectively; means for chroma (C) and hue angle (h)* were 22.76 and 76.43, respectively (C and h* were estimated from a* and b* ). Significant variation due to provenances and especially due to families within provenances was found in some wood color characteristics, and some color characteristics also differed significantly among planting zones. Genetic correlations indicate that, in general, selection of faster growing trees and/or trees with denser wood would have little effect on wood color and its uniformity. In general, wood color had relatively low heritability (h2i): among all trees, h2i = 0.31 for L; and variance due to families was not significant for a* and b* . Genetic control of color was highest in the planting zone where trees grew most rapidly: h2i = 0.48 and 0.52 for a* and b* , respectively; but variance due to families was not significant for L. Results suggest that selection based on wood color would be more effective in zones with more fertile soils and higher rainfall. 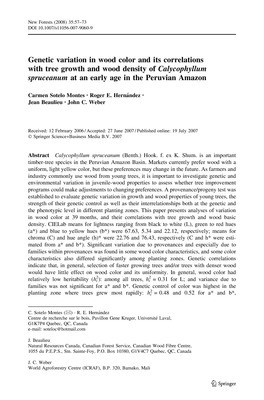