Invasions by alien organisms into new habitats pose one of the most significant global threats to ecosystem biodiversity and serious threats to economies around the globe. Canada, with its vast forests and developed forest sector, is very vulnerable to invasions of newly introduced and already established alien species. The impacts from and costs of invasive species to forests and the forest sector can be broadly divided into three categories: environmental impacts, timber losses due to reduced tree growth and increased tree mortality, and management and eradication costs. The only existing projection of potential economic impacts to Canadian forest sector gives a range of CAD$7.7 billion to CAD$20.1 billion annually. This cost projection, based on damage histories of alien invaders in sectors other than forestry, is highly variable to the loss rate used; however, the order of magnitude of the projected cost to Canadian forest sector is consistent with the aggregate cost estimates of the impact of invasive alien species to forestry in the U.S., Germany and New Zealand. Whereas impacts of invasive alien species are primarily local and national, the causes of their introduction and spread are regional and international, and are driven primarily by trade, transport and travel. Major pathways of introductions of alien species that pose risks to forests include wood packaging, trade in nursery stocks, as well as the trade and transport of wood products. An examination of management options reveals that prevention of introductions is the first and most cost-effective line of defense against invasive alien species. In addition to the high cost of eradication and control treatments in forestry, the application of many control measures is controversial from the public perspective. Prevention of introductions should involve risk analysis for each proposed import of an alien species or commodity. An analysis of institutional frameworks and existing regulatory systems in Canada, the U.S., the European Union, Australia and New Zealand is undertaken, because the U.S. and European Union are Canada's major trading partners, and Australia and New Zealand are world leaders in the prevention and control of alien invaders. National policies and action plans worldwide are based on international agreements, but they vary because of the costs involved with the prevention of introductions of invasive alien species, and concerns regarding potential disruptions of trade. In the U.S., tools for mapping the potential areas of introduction and spread are used to support prevention and control of forest pest and pathogen introductions. Both Australia and New Zealand have established specific biosecurity agencies to provide science-based risk analyses and policies to protect the countries' ecosystems and economies from invasive alien species. The costs of border inspection in Australia and New Zealand are shared between importers, the forest sector, and federal and state governments. Although current efforts in many countries, including Canada, for dealing with invasive alien organisms are effective in particular cases, they are not successful in controlling the general problem. Several measures are recommended to improve protection of Canada's forest ecosystems and forest sector from future damage caused by these species: (1) stringent enforcement of existing regulations; (2) securing funds for research, enforcement and public education; (3) providing cost-effective allocation of scarce resources to alternative management options; (4) collaboration and information sharing across different sectors and between government and non-government agencies; (5) using existing models and adapting risk assessment protocols; (6) risk analysis initiated for species from the "white list" vs. "black list," and; (7) developing education and outreach programs to raise awareness of Canadians about the problem of invasive alien species. 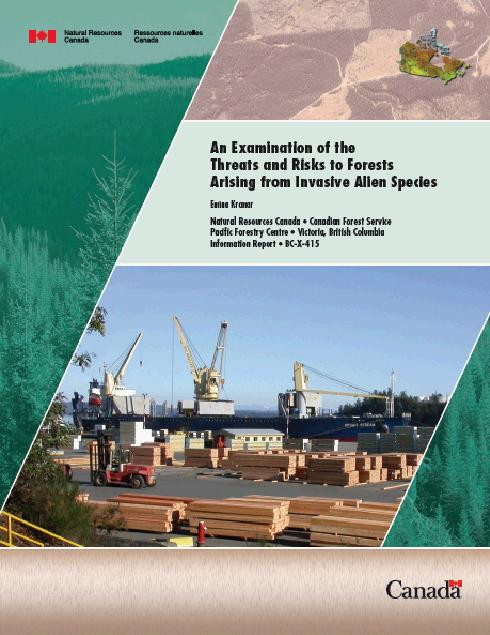