Forest biomass is the second-largest renewable energy resource in Canada, representing a major pool in the global carbon budget, but better estimates of forest biomass are needed. In the 1980s, numerous empirical biomass equations were developed for estimating forest biomass. However, many of these were reported inconsistently by different authors in terms of their form and parameter values, even for the same species, which has complicated their application. This study was undertaken to review existing methods of biomass measurement and estimation, and to identify and evaluate the existing biomass equations that might be most suitable for estimating the biomass of major species at a large spatial scale in westcentral Canada. Seventeen commonly used biomass equations and two biomass extrapolation methods were compared at the individual tree and stand scales for major species in west-central Canada. The biomass equations usually provided more consistent estimates for medium-sized trees than for small or large trees. Equations developed for the Prairie provinces and/or for national data sets were more appropriate for estimating the individual tree biomass of six boreal forest species in west-central Canada. There were no significant differences between the mean tree method and the normal distribution approach for extrapolating from individual tree biomass to stand biomass. For shrub understory biomass, there were no significant differences among the species-specific equations. For estimating belowground biomass, equations based on the aboveground biomass are recommended; therefore, accurate estimation of aboveground biomass is a prerequisite for accurately determining belowground biomass. 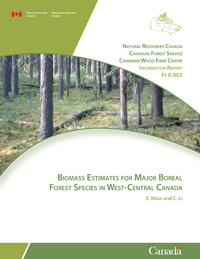