Revisiting the work of Fred von Althen an update on the growth and yield of a mixed hardwood plantation in Southern Ontario. 2007. Pedlar, J.H.; Fraleigh, S.; McKenney, D.W. The Forestry Chronicle 83: 175 - 179.

Dr. Fred W. von Althen, formerly of the Canadian Forest Service, established hundreds of research plantations with a focus on identifying tree species and silvicultural techniques conducive to successful hardwood afforestation in southern Ontario, Canada. Here we provide an update, using 30-year remeasurement data, on the growth and yield of one of his most productive, and compositionally unique, mixed hardwood plantations. At age 30, the plantation exhibited the following characteristics on average: 1) density of 790 stems/ha—reduced from 2222 stems/ha at time of planting through natural mortality; 2) height of 14.4 meters; 3) quadratic mean diameter of 20.1 cm; and 4) gross stand volume of 181 m3/ha. With a mean annual increment (MAI) of 6.1 m3/ha/year, this plantation exhibits one of the highest published growth rates for mixed hardwoods in temperate North America. There was considerable variation in growth and yield between the 10 hardwood species making up the stand—silver maple, white ash, and black walnut had the highest growth rates, and red and white oak the lowest. Several Carolinian species, such as catalpa and sycamore, showed good growth rates, despite the study site being located north of their published range limits. This data set provides rare information on the growth and yield of mixed hardwood plantations in Canada. 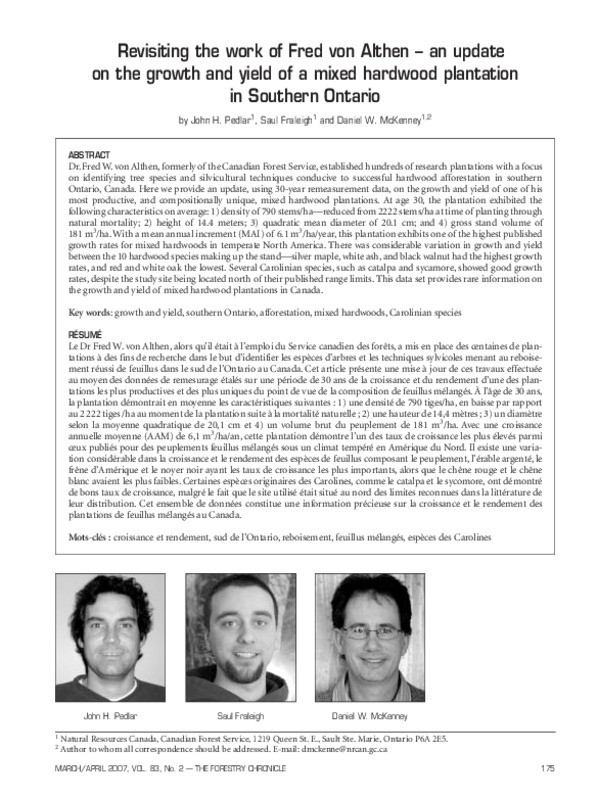