Two new density estimators for k-tree distance sampling are proposed and their performance is assessed in simulated distance sampling from 22 stem maps representing a wide range of natural to semi-natural forest tree stands with random to irregular (clustered) spatial distribution of trees. The new estimators are model-based. The first (Orbit) computes density as the inverse of the average of the areas associated with each of the k-trees nearest to a sample location. The area of the k-th tree is obtained as a prediction from a linear regression model while the area of the first is obtained via a Poisson probability integral. The second (GamPoi) is based on the expected distribution of distance to the k nearest tree in a forest where the local distribution of trees is random but the stem density varies from sample location to sample location as a gamma distribution. In a comprehensive assessment with 17 promising reference estimators, a subset composed of Morisita’s, Persson’s, Byth’s, Kleinn’s, Orbit, and GamPoi was significantly better, in terms of relative root mean square error (RRMSE), than average. GamPoi emerged as the better estimator for sample sizes larger than or equal to 30. For smaller sample sizes, both Kleinn’s and Morisita’s appear attractive. 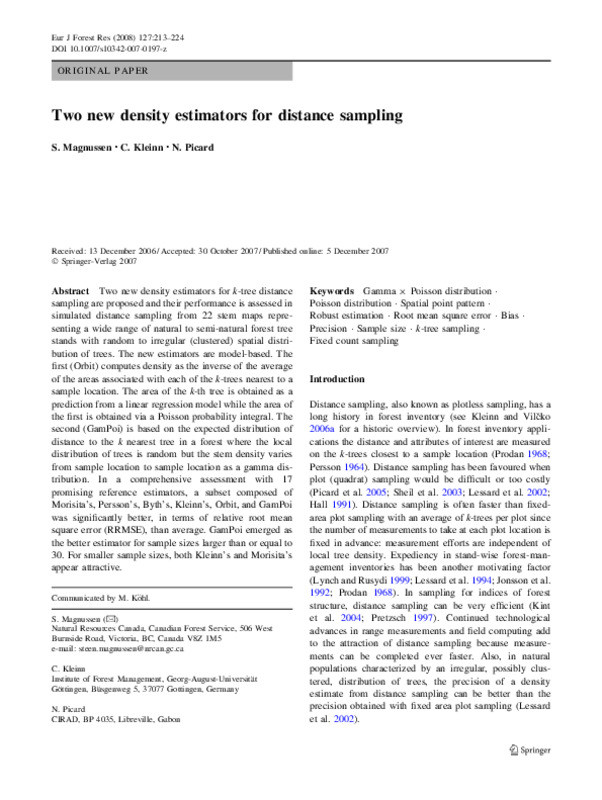