This report assesses the threat of mountain pine beetle (Dendroctonus ponderosae Hopkins) to Canada's boreal and eastern pine forests. It is based on available evidence and expert advice provided by researchers and forest managers at two workshops held in Edmonton, Alberta and Victoria, British Columbia during August and September of 2007.

The main findings include: 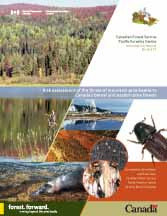