Conifers are characterized by a large genome size and a rapid decay of linkage disequilibrium, most often within gene limits. Genome scans based on noncoding markers are less likely to detect molecular adaptation linked to genes in these species. In this study, we assessed the effectiveness of a genome-wide single nucleotide polymorphism (SNP) scan focused on expressed genes in detecting local adaptation in a conifer species. Samples were collected from six natural populations of white spruce (Picea glauca) moderately differentiated for several quantitative characters. A total of 534 SNPs representing 345 expressed genes were analysed. Genes potentially under natural selection were identified by estimating the differentiation in SNP frequencies among populations (FST) and identifying outliers, and by estimating local differentiation using a Bayesian approach. Both average expected heterozygosity and population differentiation estimates (HE = 0.270 and FST = 0.006) were comparable to those obtained with other genetic markers. Of all genes, 5.5% were identified as outliers with FST at the 95% confidence level, while 14% were identified as candidates for local adaptation with the Bayesian method. There was some overlap between the two gene sets. More than half of the candidate genes for local adaptation were specific to the warmest population, about 20% to the most arid population, and 15% to the coldest and most humid higher altitude population. These adaptive trends were consistent with the genes’ putative functions and the divergence in quantitative traits noted among the populations. The results suggest that an approach separating the locus and population effects is useful to identify genes potentially under selection. These candidates are worth exploring in more details at the physiological and ecological levels. 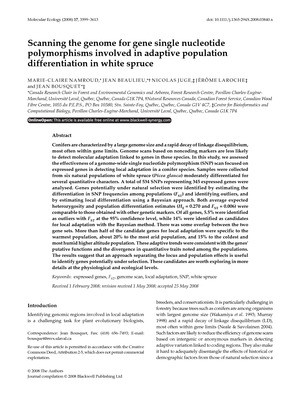