This report summarizes current knowledge about recent changes in the climate of Canada’s forests and projects further changes over this century based on scenarios of future global greenhouse gas emissions developed by the Intergovernmental Panel on Climate Change. Even with sustained reductions in global emissions the future climate is predicted to be quite different, meaning that adaptation will be essential. Impacts on the forest are already occurring and will be substantial in the future. The current upward trend in area burned annually is expected to continue. Forests will be prone to widespread stress induced by the changing climate, increasing the likelihood of pest outbreaks in the short to medium term. Recent outbreaks of several pests have exceeded in scope all previous known epidemics of these pests and are associated with the crossing of a climatic threshold. Invasion of the boreal forest by the mountain pine beetle, Dendroctonus ponderosae (Hopkins), appears likely, although the effect of this range expansion would likely be less severe than that observed recently in British Columbia, and outbreaks of the spruce budworm, Choristoneura fumiferana (Clemens), are predicted to be longer and more severe in the future. Future forest growth in response to climate change is expected to be variable, with growth reduction because of drought in parts of Canada’s western forests perhaps the most dramatic short- to medium-term outcome, though modestly increased growth in the east is predicted. Such impacts have implications for the cost and characteristics of timber supply, and climate change will also affect forestry operations, recreation opportunities, biodiversity, and carbon storage. Planning based on past approaches will need to be reconsidered. Current objectives for sustainable forest management may not be attainable in the future, although there may be some new opportunities. Climate change may produce public safety risks, significant economic and social dislocation in forest-dependent communities including Aboriginal communities, and impacts on the competitiveness of companies as well as on the actions and policies of all levels of government. These effects can be reduced through early identification and implementation of actions to reduce vulnerabilities or take advantage of new opportunities. The key needs associated with adaptation in the forest sector include awareness building and debate, improved knowledge and information, vulnerability assessments, planning frameworks and tools, and enhanced coordination and cooperation among governments and other forest sector participants. Meeting the challenge of adaptation will require sustained effort for many years.

Also available under the title:
The importance of forest sector adaptation to climate change (English) 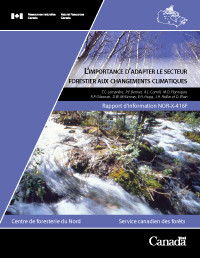