The gypsy moth has become established throughout southern Canada east of Lake Superior where the climate is suitable for the completion of its univoltine life cycle. The spread of the gypsy moth to the north and west in Canada has so far been prevented by climatic barriers and host plant availability as well as by aggressive eradication of incipient populations. Climate change is expected to increase the area of climatic suitability and result in greater overlap with susceptible forest types throughout Canada, especially in the west. At the same time, the gypsy moth is spreading west in the USA into states bordering western Canadian provinces. These circumstances all lead to a greatly increased risk of further invasion into Canadian forests by the gypsy moth. Management actions need to be intensified in different ways in different parts of the country to reduce the impacts of spread in eastern Canada and to prevent the gypsy moth from invading western regions. 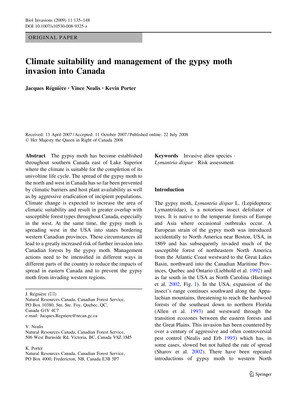