This publication is intended to help planners and policymakers in Ontario account for the potential impacts of climate change on people, infrastructure, and the environment. This overview of Ontario's future climate is based on the Canadian Coupled Global Circulation Model and uses two scenarios of future greenhouse gas emissions resulting from human activity in the 21st century, the A2 and the B2 scenarios. The A2 scenario projects future greenhouse gas concentrations reaching the equivalent of 1,320 ppm C02 by the year 2100 (pre-industrial levels were about 330 ppm). In anA2world before the end of the century, summers in most of southern Ontario will on average be 5°C hotter and 20% less rain will fall from April to September compared with the period 1971-2000. Winters in some southern Ontario locations will be up to 6°C warmer, with 10 to 20% reductions in precipitation from October to March. In northern Ontario, temperatures in the A2 scenario will warm by up to 10°C in winter and 6°C in summer, with greatest warming adjacent to Hudson Bay. Large parts of the north will receive less precipitation, particularly in winter in areas near the Manitoba and Quebec borders. Up to 20% less summer precipitation will fall in the western half of northwestern Ontario by the end of the century. The B2 scenario is based on lower greenhouse gas emissions compared to scenario A2, with the atmosphere reaching the equivalent of915 ppm C02 by2100. As a result, the rate of climate change in a B2 world will be significant but less than if the A2 scenario comes about In 2071-2100, for example, the B2 world will see 3 to 5°C warming in southern Ontario in summer and 4 to 5°C warming in winter compared with 1971-2000. Most of southern Ontario will receive up to 10% less precipitation during the warm season and up to 20% less precipitation in winter. In northern Ontario in 2071-2100, summers will warm by 3 to 5°C and winters by 4 to 9°C compared to 1971- 2000.Temperature increases will be greatest in the far north. In the B2 world, much of northern Ontario will be considerably drier than in 1971-2000, with annual precipitation reduced by up to 10%in much of the northwest and some areas receiving 20 to 30% less cold season precipitation. 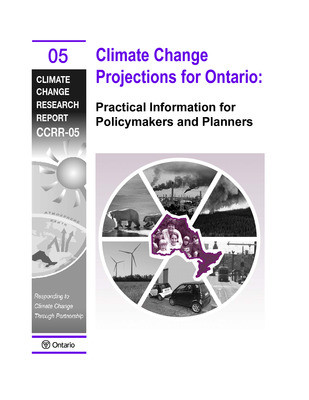