The application of trivariate thin-plate smoothing splines to the interpolation of daily weather data is investigated. The method was used to develop spatial models of daily minimum and maximum temperature and daily precipitation for all of Canada, at a spatial resolution of 300 arc s of latitude and longitude, for the period 1961–2003. Each daily model was optimized automatically by minimizing the generalized cross validation. The fitted trivariate splines incorporated a spatially varying dependence on ground elevation and were able to adapt automatically to the large variation in station density over Canada. Extensive quality control measures were performed on the source data. Error estimates for the fitted surfaces based on withheld data across southern Canada were comparable to, or smaller than, errors obtained by daily interpolation studies elsewhere with denser data networks. Mean absolute errors in daily maximum and minimum temperature averaged over all years were 1.18 and 1.68C, respectively. Daily temperature extremes were also well matched. Daily precipitation is challenging because of short correlation length scales, the preponderance of zeros, and significant error associated with measurement of snow. A two-stage approach was adopted in which precipitation occurrence was estimated and then used in conjunction with a surface of positive precipitation values. Daily precipitation occurrence was correctly predicted 83% of the time. Withheld errors in daily precipitation were small, with mean absolute errors of 2.9 mm, although these were relatively large in percentage terms. However, mean percent absolute errors in seasonal and annual precipitation totals were 14% and 9%, respectively, and seasonal precipitation upper 95th percentiles were attenuated on average by 8%. Precipitation and daily maximum temperatures were most accurately interpolated in the autumn, consistent with the large well-organized synoptic systems that prevail in this season. Daily minimum temperatures were most accurately interpolated in summer. The withheld data tests indicate that the models can be used with confidence across southern Canada in applications that depend on daily temperature and accumulated seasonal and annual precipitation. They should be used with care in applications that depend critically on daily precipitation extremes. 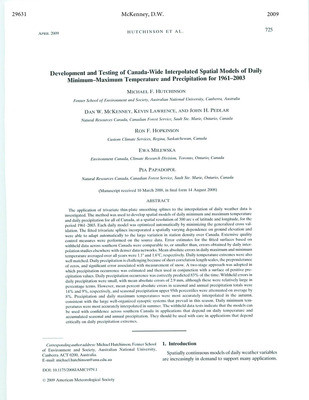