A forest-based conceptual model of spruce beetle population dynamics was developed based largely on the collective hypotheses, experience, and intuition of the bark beetle research team at Pacific Forestry Centre. Only a limited amount of published and unpublished information, from a population dynamics study of the spruce beetle in central British Columbia, was used in the development of the model. The model provides a means for evaluating the relative importance of a number of factors affecting spruce beetle populations and mortality of spruce from the spruce beetle. Sensitivity analysis indicated that the factors in the model that had the greatest effects on cumulative spruce mortality were forest age, mean July-August temperature, maximum wind speed, winter mortality of beetles, and direct control. High densities of logging residue or windfall were not always followed by increased killing of spruce trees; high densities of susceptible trees were also required for development of outbreaks. This model is useful for illustrating which factors might be important in the development and course of a spruce beetle outbreak. 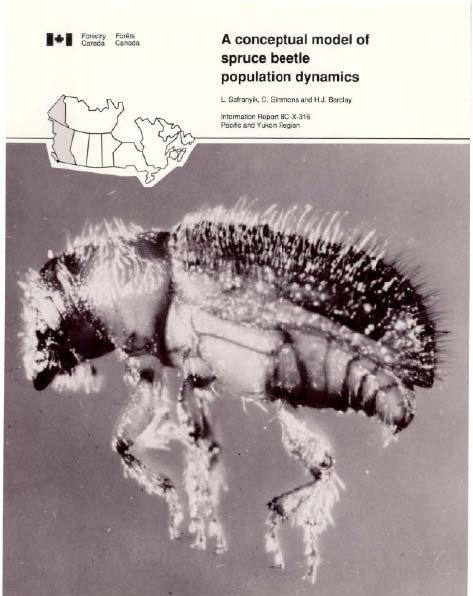