Design-based estimators of the sampling variance for apparent (S0 = observed) and predicted species richness have been lacking. A balanced repeated replication (BRR) estimator is proposed and recommended for S0. Good performance of the estimators is demonstrated in two contrasting examples with Monte Carlo (MC) simulations of simple random sampling with fixed area quadrats (plots) for estimating forest tree species richness. Chao and Lee's estimator of species richness was used. In BRR a set of half-samples forming an orthogonal design with respect to the inclusion/exclusion of sample records is used to produce estimates from the observed half-sample and models for the effect of data-splitting. BRR estimates of the sampling variance of S0 were close to the MC estimates in the examples from eastern Canada (PROV) and the Barro Colorado Island (BCI) and clearly superior to naive model-based estimates. BRR estimates were generally close to their MC counterparts, but in BCI a bias of approximately -10% was seen in small samples (n = 24). BRR estimates of sampling variance in PROV were close to the MC estimates for n = 60. With larger sample sizes the BRR estimates drifted toward values obtained with Chao and Lee's model-based variance estimator. In BCI the opposite was true. 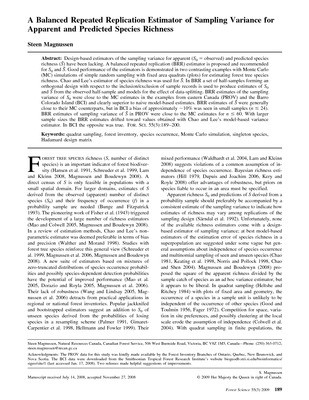