One of the main issues facing the forest sector at present relates to striking a balance between the increasing demand for wood fibre and the need to maintain the sustainability of forest ecosystems. New approaches are needed to ensure more effective management of ecosystems and to implement intensive silviculture where possible to increase timber yields. To achieve this shift, we need to determine the economic potential of the various options available, including the use of biotechnology. This study was undertaken to estimate the benefits produced by genetically improved white spruce plantations, to determine the optimal economic rotation age for such plantations, and to evaluate the effect of certain factors such as the quality of reforestation sites, potential genetic gains from the use of biotechnology, and silvicultural regimes. Genetic gains are estimated in relation to 3 production approaches: 1) planting of seedlings obtained from seed orchards (10% height gain), 2) planting of multifamily varieties using cuttings from superior families obtained from controlled crosses (15% height gain) and 3) planting of multiclonal varieties produced through somatic embryogenesis and selected from seed orchards using genetic markers (20% height gain). The latter approach is still under development but is considered realistic. The present value of benefits (PVB) and the equivalent annual cash flow (EACF) criteria were used to estimate the benefits resulting from these genetically improved plantations and to determine the optimal economic rotation age. The analyses showed that the forest site quality has the greatest influence, followed by the factors representing productivity gains associated with genetic gain, and the silvicultural regime. Genetically improved stock can generate increases in PVB of up to 73% depending on the approach used to exploit the potential genetic gains. The results suggest that, to maximize profitability, improved stock should be used on the most productive sites and the plantations should be intensively managed. 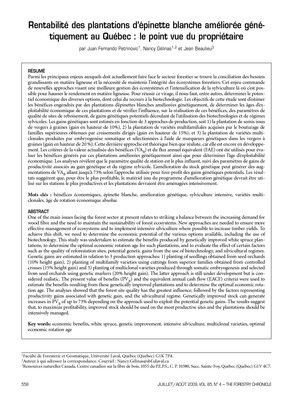