Over the next several decades, the climate in Canadian forests will shift northward at a rate that will likely exceed the ability of individual tree species to migrate. While most tree species can migrate naturally up to a few hundred metres per year via seed dispersal, the climatic conditions in which each species thrives may move north by several thousand metres per year. Canada’s forests are home to well over 100 species of trees, of which 93 are commercially important. Canada’s tree species are vulnerable to climate change because trees are sensitive to climate, and there is now little doubt that significant climate change will continue over the next century. In fact, the effects of climate change on tree species are already occurring. For example, drought has caused significant mortality of aspen trees in the southern boreal forest of Alberta and Saskatchewan, and warmer winters have contributed to a mountain pine beetle epidemic that is expected to kill more than three-quarters of the pine volume in British Columbia by 2015. Although it is expected that the overall net effect of climate change on commercially important tree species in Canada will be negative, a changing climate may also increase tree growth in some areas. Adaptation to climate change by modifying forest management policies and practices has the potential to reduce the vulnerability of tree species to climate change. However, before the process of adaptation can begin, it is necessary to understand how and where tree species are vulnerable, and to identify viable adaptation options. 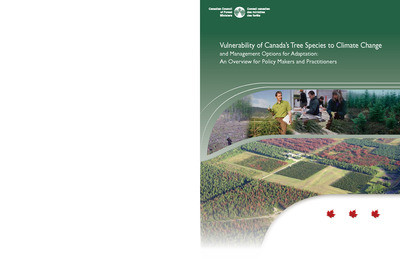