This report documents the 15-year growth response of a Douglas-fir (Pseudotsuga menziesii (Mirb) Franco) stand to thinning and urea fertilization. The initial treatments were carried out when the stand was 24 years old. Growth responses were analyzed on a per hectare, individual tree, crop tree, and tree size class basis.

Most mortality occurred in the unthinned plots, and within these plots fertilization has accelerated mortality. In the unthinned and fertilized plots, up to 30% of the trees died, and most of these were small suppressed trees.

Fifteen years after initial treatment, the unthinned plots had the most total volume followed by the moderately thinned and then the heavily thinned plots. However, in terms of total merchantable volume at a dbh limit of 17.5 cm, the order was reversed. In all thinning levels, fertilization increased the total and merchantable volumes and the application of 448 kg N/ha resulted in significantly more volume than 224 kg N/ha.

Average individual tree size, measured by dbh or stem volume, was increased by both thinning and fertilization and the response to fertilization was greatest in the heavily thinned plots. Thinning alone increased the quadratic mean diameter more than fertilization alone, but both treatments caused similar increases in the average diameter of the largest 250 and 500 trees per hectare.

The largest trees in all plots continued to grow fastest, but the smallest trees benefited most from the treatments in terms of increased relative growth rates. For example, in the heavily thinned plots fertilized twice with 448 kg N/ha, the trees initially in the 5-10 cm diameter class added stem volume six times faster than trees of similar size in the control plots.

For the period 12 to 15 years after treatment, all plots fertilized once with either 224 or 448 kg N/ha had net annual volume increments greater than unfertilized plots with the same level of thinning. These increases in volume growth rates were largest in the heavily thinned plots followed by the moderately thinned and then the unthinned plots.

With the first 3 years after treatment excluded so that the observed effect of thinning shock is removed, annual top height growth in the period from 3 to 9 years after initial treatment was significantly increased by both fertilization and thinning. 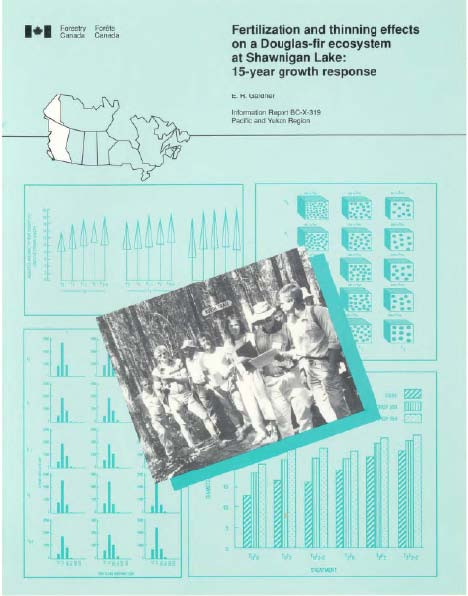