A study on revegetation following wildfires was conducted on four fires near the Yukon Territory - British Columbia border (60' N. Lat.). One wildfire occurred at Aishihik junction off the Alaska Highway in south-central Yukon in 1980; and three fires occurred near Watson Lake, Yukon Territory in 1982 - one in Yukon and two in British Columbia. This report covers the first 5 years of vegetation succession on 47 plots established in the areas burnt by these four fires. Coniferous tree seedlings or aspen juveniles appeared on all plots within 3 years, and varied in density from 700 to 80 100 juveniles/ha in the fifth year. Shrubs, mostly regenerating from root stalks and rhizomes, were frequently the tallest plants. Forbs did not appear to be major competitors as some populations would attain a peak coverage during the second or third year and then diminish, while others remained with low coverage. A moss, Ceratodon purpureus, provided the most coverage of all species on most sites. The stable communities on a site can apparently be predicted after about 5 years based on the species of trees, shrubs, and forbs present, but additional monitoring is required to confirm this and document the various seral stages. 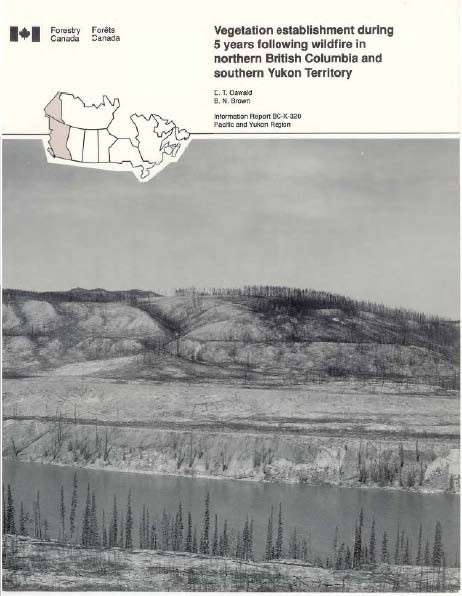