This project was undertaken to test and evaluate the performance of the FORCYTE-11 model using data from Forestry Canada's thinning and fertilization trials of Douglas-fir at Shawnigan Lake, British Columbia. The project was divided into two distinct phases. In phase I, FORCYTE-11 was run using the standard Vancouver Island Douglas-fir input data provided by the model's authors. The model was used to simulate four treatments at Shawnigan Lake and its performance was evaluated using statistical and graphical techniques on 21 variables. In phase II of the project the model was calibrated using data from the Shawnigan Lake control plots and the simulations and evaluation were repeated for the same four treatments and 21 variables. Additional runs were made for all 15 treatments to compare the model and data rankings of the treatments for three variables.

Phase I results indicated the model was not well calibrated for the Shawnigan Lake site. Simulation of tree growth on the control plots was inaccurate. Foliage biomass increased too rapidly in the simulations for all treatments. At crown closure the model predicted N limitation resulting in an extreme underestimate of foliage biomass on the control plots. Simulation of foliage biomass was more accurate for thinned or fertilized plots. Decomposition processes were not well calibrated. The model predicted humus levels of about 20 Mg ha-1 yet actual soils data indicated a humus level in excess of 100 Mg ha-1.

The model was calibrated in phase II of the project using data from the Shawnigan Lake control plots. Salal was added to the simulation as a competitor for the Douglas-fir. Resulting simulations of tree biomass growth were generally improved. Simulation of foliage biomass accumulation was more realistic, but was still underestimated on the control plots. Predictions of density dependent mortality in unthinned treatments improved slightly. The simulation of soil humus levels was more accurate. The calibrated FORCYTE-11 model was able to accurately simulate some of the tree growth responses to thinning and fertilization at Shawnigan Lake. The model's simulations of 15 treatments underestimated stemwood volume and volume increment in treatments with low fertilization. Estimates improved with increasing levels of fertilization although in some cases volume and volume increment were overestimated. This bias was more extreme for unthinned treatments. The model's ability to rank treatments for volume and stem density decreased with the length of the simulation. Model rankings for volume increment were best at the beginning and end of the simulation. At no time did model and data treatment rankings significantly differ from each other (5% level).

FORCYTE-11 was difficult to calibrate,but the calibrated version was relatively easy to use. Model simulations may be improved by incorporating additional stocking, growth, and yield data from higher quality sites. A calibrated version of the model should be useful as both a management simulator and a research tool. 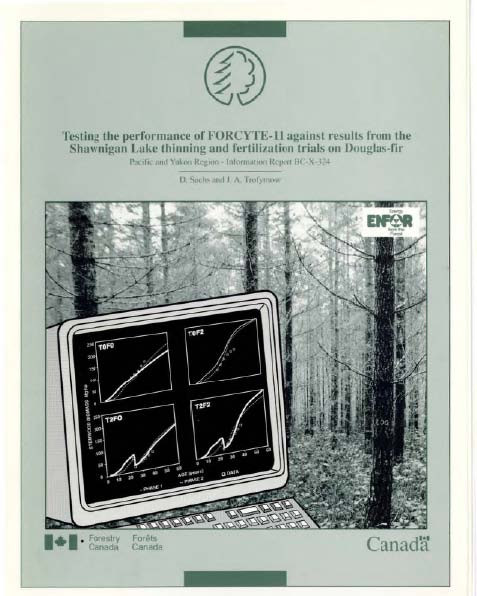