Two clearcut sites located in the southern interior of British Columbia, stumped to control root disease in 1980, were studied along with adjacent unlogged and logged but non-stumped portions to determine whether the stumping affected seedling growth, particularly through changes in soil properties. One of the sites (Gates Creek) was located near Vernon in the Moist, Warm Shuswap variant of the Interior Douglas-fir Zone. The other site (Phoenix) occurred in the Moist, Cool Kootenay variant of the Interior Cedar-Hemlock Zone. Two stumping treatments were employed. The first involved stump/root extraction with a bulldozer and brush blade followed by windrowing or piling of the stumps. The second treatment differed in that it also included a final raking with a bulldozer and brush blade to bring more of the broken roots to the surface.

Ground surveys were conducted to determine the type, depth, extent and cause of soil disturbance on stumped and non-stumped portions of the cutovers. Soils associated with major soil disturbance categories were tested for penetrability, bulk density, pH, total nitrogen and organic carbon and these measures compared with "undisturbed" soils, i.e., those with humus intact. Plantations of Douglas-fir (Pseudotsuga menziesii) and lodgepole pine (Pinus contorta var. latifolia) were established at Gates Creek and Douglas-fir and western larch (Larix occidentalis) at Phoenix. Trees were thinned after 5 years and a final measurement of heights and diameters made on the residual trees after 8 years. Other measures taken on or around randomly selected trees included plant moisture stress, foliage nutrient content, soil moisture, top and root weights and vegetative composition and cover.

Results were described in terms of area disturbed by each treatment, soil physical and chemical properties and seedling performance. The initially dense and moist soil at the Gates Creek site was more adversely affected by the stumping operations than the relatively loose, dry soil at the Phoenix site. Up to 8 years, tree growth was generally reduced by the stumping disturbance on the Gates Creek site; whereas, stumping without raking was generally favorable to tree growth on the Phoenix site.

Recommendations are made for reducing detrimental effects of stumping particularly on sensitive soils. 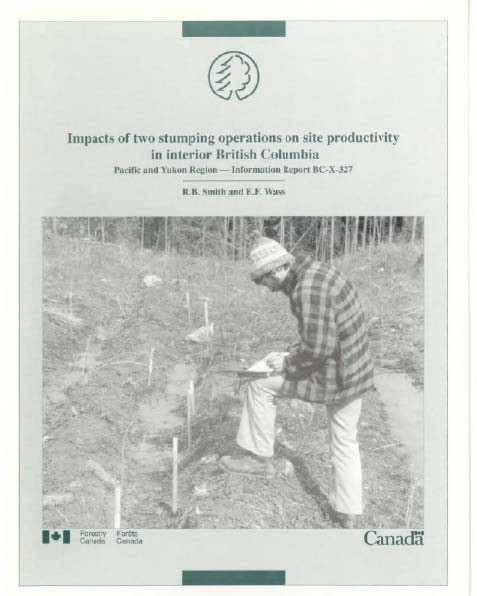