Overstory litter fall, primarily needles, was collected for 15 years within control and treated plots in a stand of Douglas-fir (Pseudotsuga menziesii (Mirb.) Franco) located near Shawnigan Lake, British Columbia. Treated plots were thinned or fertilized, or both; thinned plots had two-thirds of their basal area removed, fertilized plots were treated with 448 kg·ha-1 of either urea or ammonium nitrate, and half the fertilized plots were refertilized at the same rate 9 years later. The annual rate of litter fall in control plots averaged 1890 kg·ha-1. In control plots significant yearly variations were observed in litter-fall mass and concentrations of K, Mg, and Ca but not N or P. Thinning decreased rates of litter fall by 80%, but rates returned to control-plot levels after 13-15 years in unfertilized plots and after 8-10 years in fertilized plots. Fertilization without thinning depressed litter fall in the year of treatment but increased the rate by 20-80% in subsequent years. Litter-fall N concentrations increased by 40-80% the year of fertilization and then began declining 3-6 years later. Nitrogen fertilization reduced litter-fall P, K, and Mg concentrations for 8, 4 and 1 year(s), respectively, following fertilization. The effects were greater in ammonium nitrate plots than in urea plots. Rates of litter fall correlated poorly with stand density but well with basal area and stemwood increment. Correlations with the latter two variables varied with time and treatment. 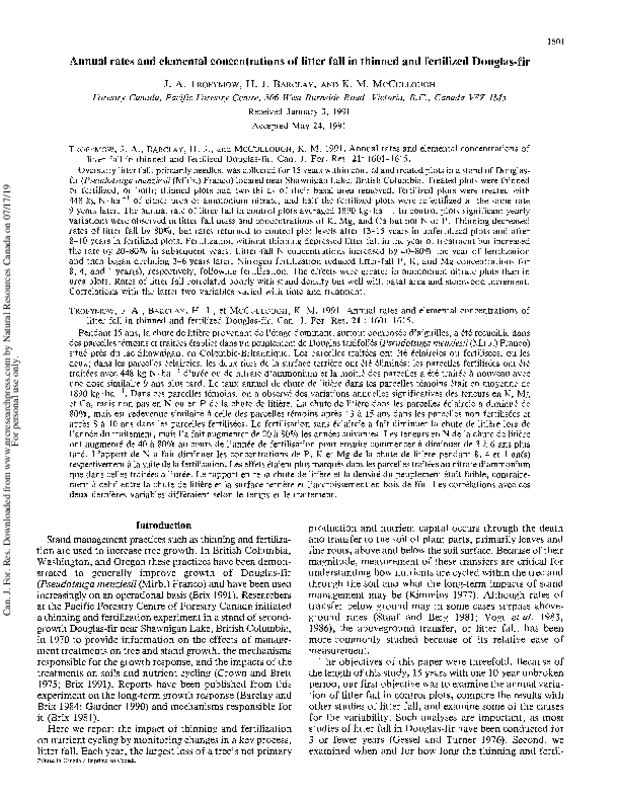