Models of four pairwise combinations of pest control are examined to assess patterns of application which will minimize cost during a control program. The models result in isoclines which represent zero growth of the pest population; any increase in the level of control will cause collapse of the pest population. While all points on an isocline represent zero growth, only one point (representing one particular combination) generally will minimize the cost once the relative costs of the two methods are known. This combination will depend on pest population size if the control methods differ in their action with respect to population density, and thus the optimal combination will change as the pest population density changes. The optimal combination favors positively density-dependent methods or density-independent methods, such as the use of insecticides, at high density and negatively density-dependent methods, such as sterile releases or pheromone trapping, at low density. 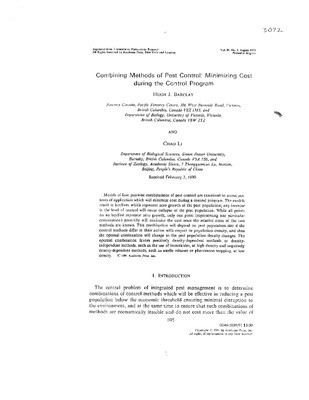