A naturally occurring virus often leads to the development of an epizootic late in the outbreak cycle of the Douglas-fir tussock moth, but not before significant damage occurs to the trees. This virulent virus can be mass-produced in the laboratory and, when applied early in the outbreak cycle, can prevent severe defoliation. This, however, requires that an early-warning system be integrated with a virus treatment. The development and integration of a pheromone monitoring system with a virus treatment is described. Stands susceptible to Douglas-fir tussock moth outbreaks are defined by overlying maps of past outbreaks, forest and habitat types, and climatic zones. Pheromone-baited traps are placed and monitored annually at permanent locations in the susceptible areas. Measuring annual trends of moth density indicates the time and location of the next outbreak. Trap-catch data provide an early warning of impending outbreaks. This is confirmed by ground reconnaissance. Insect density and defoliation is predicted from egg-mass and larval sampling. The virus then can be applied from the air or from the ground into threatened stands to initiate an epizootic to prevent the development of an outbreak and to minimize tree damage. The virus appears to spread, and field tests with reduced dosages indicate that that small amount of virus applied can still decimate larval populations and prevent tree mortality, at considerably reduced cost. 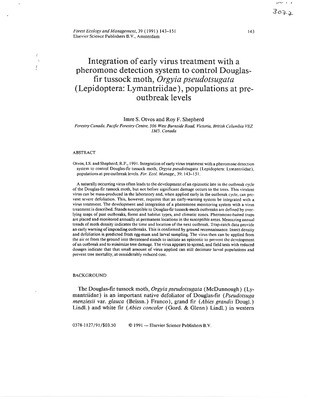