Previous research at FPInnovations, PAPRICAN indicated that the use of mountain pine beetle-killed wood to produce mechanical pulp (TMP) resulted in a small impact on pulp strength and more pronounced influence on sheet structure (sheet density and roughness) of handsheets (Dalpke et al. 2008; Hu et al. 2009A). Preliminary tests on TMP pulp made from late-grey-stage wood also revealed a potential increase in the linting propensity. However, it was not clear to what extent printing paper quality issues are related to changes in incoming-fibre quality or to changes in processing when using beetle-killed wood. Peroxide bleaching of grey-stage beetle-killed lodgepole pine required an increased peroxide charge to reach a brightness target, affecting physical properties moderately and effluent load significantly. For sodium hydrosulphite bleaching of green and grey-stage wood, the changes in pulp properties, other than brightness, due to changes in hydrosulphite charge were small and not likely to be felt in a mill setting. To monitor wood quality entering the mill, an online chip sensor was installed and used to monitor chip properties: bark, extractives, density, pine (blue), pine (clear), spruce, miscellaneous species, moisture and brightness. The chip-sensor calibrations that were developed were good for chip moisture content and miscellaneous species content, and fair for extractives content and pine (blue) content. Good calibrations were not obtained for the remaining five chip properties, in part because of low variability in the calibration samples. There was large short-term variability of most predicted chip properties, with the exception of chip density and brightness. However, the influence of short-term chip property variability on the unbleached TMP properties was small due to the chip handling and storage between the chip sensor and the TMP operation, which resulted in the chips being mixed within the process and damped the impact of variability. The long-term variability of chip properties was small, and the chip sensor did not detect any major changes in the chip supply over the long term, in terms of bark content, species mix, density, extractives, moisture and brightness. The unbleached TMP properties were strongly influenced by operating conditions, such as refiner plate time, primary and secondary refining energies, reject refining power and production. These operating effects had a stronger impact on TMP quality than did the incoming-chip quality; as a result, no influence of the variation of chip properties on unbleached TMP properties could be detected. Because no effect of chip-property variability on unbleached TMP properties was detected, the PLS model was not extended to determine effect on bleached TMP and finished paper properties. Further work is needed to determine the impact of quality of chips from mountain pine beetle-killed pine on unbleached TMP and finished paper quality at this mill. 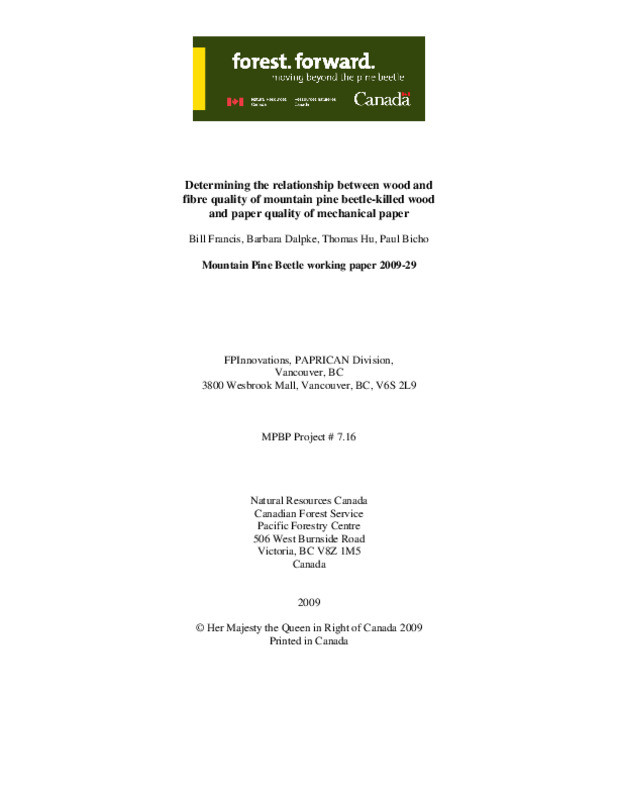