To assess the growth of the uneven-aged stands of Douglas-fir in the Interior Douglas-fir (IDF) zone and the factors influencing the growth, data from 92 permanent sample plots were obtained. Volumes ranged from 3-453 m3/ha, with a mean of 94 m3/ha. Annual growth rates varied from -1.8 to 9.5 m3/ha, with a mean of 3.3 m3/ha. The plots varied considerably in the quality and quantity of data provided, having been established at different times, by different agencies, using different measurement methods.

Factors included in the analysis were: harvesting method or treatment (three classes), biogeoclimatic subzone (two classes), time since treatment, and the stand variables of stocking, basal area per hectare, and quadratic mean diameter. Statistical analyses and visual examinations of scattergrams were used in the assessment. Results indicated significant differences among harvesting methods and biogeoclimatic subzones. Hence, the data were divided into four groups with statistically significant differences.

A volume growth equation was next derived for each group using the stand variables as independent variables. For two groups (Diameter Limit Harvest, and No Harvest of subzone DK), stocking was statistically significant while for a third (No Harvest, subzone XH), stocking as well as mean diameter were significant. The last group (Fallers Selection method) had no significant independent variables. Multiple coefficients of correlation ranged from 0.28-0.60.

These results indicate that while some trends are apparent they are not well defined and growth predictions are unreliable. This result is attributed to deficiencies in the data and to natural variability within IDF stands.

The growth equations comprise a simple stand growth model. To use the model, the following data must be available: harvesting method; biogeoclimatic subzone if no harvest has occurred in the stand; and stocking and quadratic mean diameter. 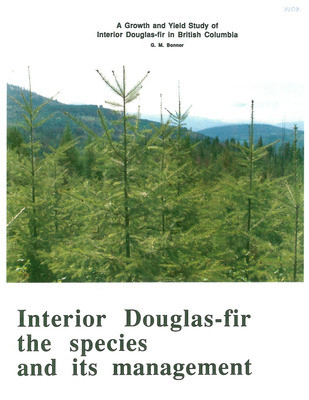