The concept of biodiversity can be simply defined as the sum of all biotic variation from the level of genes to ecosystems. Biodiversity at the species level, frequently called “species diversity”, is a core concept of ecological community and conservation research. To date, however, no single number can fully capture such a concept without loss of information, although many attempts have been made to quantitatively express species diversity. Three aspects of species diversity have received considerable attention in the literature: species richness, evenness and abundance. Current diversity indices often emphasize evenness at the expense of richness or abundance. In this paper, we propose to express species diversity of communities as their position in a three-dimensional volume along the axes of richness, abundance, and evenness. With hypothetical as well as actual examples from our own studies, we discuss the usefulness of this three dimensional approach. We believe that expressing species diversity as a volume is biologically intuitive, easy to interpret numerically and ecologically, and very useful in the assessment and management of biodiversity at the species level. 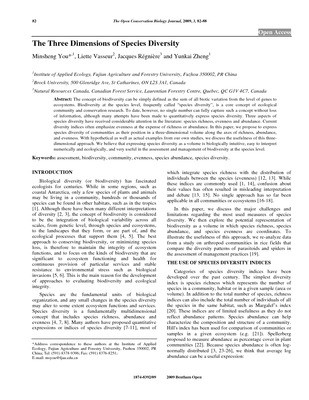