Two-year cycle spruce beetle (Dendroctonus rufipennis [Kirby]) adults were collected from emergence traps installed on two types of hosts (stumps and windfalls) in two adjacent timber-harvesting areas in central British Columbia over a five-year period to determine the incidence of associated fungi, bacteria, yeasts, nematodes and mites. There was no difference in either the mean size or the female ratio of spruce beetles between host types or areas. Yeasts and bacteria were the most common associates of the spruce beetle and were isolated from the majority of beetles, regardless of host type. Pesotum sp. A, a blue stain fungus, was the most common filamentous species and was isolated from 63% of the 221 beetles sampled. This fungus appears to be closely associated with the spruce beetle regardless of host type. At least 25 taxa of other filamentous fungi (OFF) were also isolated from beetles. Most of the OFF were common, wind-dispersed species, prevalent in the environment, e.g., Penicillium and Cladosporium spp., and are likely only incidental associates of the spruce beetle. OFF were more likely to be isolated from beetles emerging from windfalls than from stumps. This may have been due to higher moisture conditions experienced by pre-emergent beetles in windfalls, which promoted the growth of some OFF. The incidence of mites and nematodes associated with the spruce beetle was relatively low; however, only those observed on the exoskeleton were recorded. The association of microorganisms sampled in this study of the spruce beetle did not vary between the two timber-harvesting areas. Despite differences in the two types of host material, the spruce beetle is able to maintain a consistent association with yeasts, bacteria, and Pesotum sp. A. 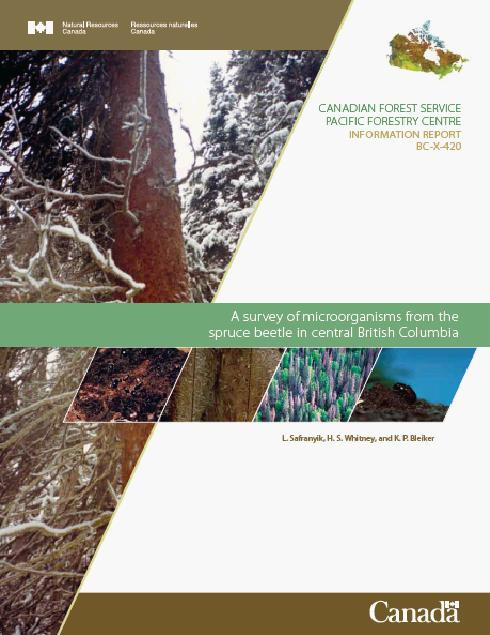