Dead organic matter submodel parameters of the Carbon Budget Model of the Canadian Forest Sector 3 (CBM-CFS3) were verified using litterbag decomposition data from the Canadian Intersite Decomposition Experiment (CIDET). This national experiment provided 12 years of decomposition time series data from 18 sites across Canada for calibration of decay parameters for foliar litter (very fast decay pool) and aboveground fine woody debris (fast decay pool). Time series of measured carbon remaining were compared to model predictions to improve the model's decomposition algorithm, which includes base decay rates, temperature response coefficients, and the proportion of carbon transferred from quickly decaying dead organic matter pools to the slow humified pool. A statistical approach was developed to optimize several model parameters simultaneously by minimizing residual errors. For foliar litter, which is contained in the aboveground very fast pool in CBM-CFS3, the asymptotic form of the decay function used in the model was consistent with the measured time series for both needle and leaf litter. Optimized decay parameters had a smaller base decay rate (0.36 yr-1 at a 10o C reference temperature), a larger temperature quotient (Q10=2.7), and a slightly larger proportion transferred to the slow pool (0.185) compared to the default model decay parameters. The absolute error between predicted and measured carbon remaining was reduced from 14.1% to 7.6% when the optimized parameters were used in place of the default parameters. Potential model modifications were tested to assess if additional climate variables would further improve model predictions. Adding summer precipitation as a decay modifier and simulating first-year leaching with winter precipitation resulted in modest improvements. For wood blocks, which are contained in the aboveground fast pool in CBM-CFS3, the data were not well represented by the model's asymptotic form of decay. Instead, colder sites had a linear decay rate, and the remaining sites had a variable decay rate that would be better described by a sigmoidal function. Four potential modifications to the decay algorithm were tested to estimate improvements in model predictions of fast pool decay. These included a temperature-dependent time delay, a sigmoidal function for decay, and the addition of a holding pool that had either a delayed transfer or a decayed transfer. These modifications reduced the errors by about 1.9%, 3.4%, 2.2% and 2.6%, respectively. Their implementation in the model would, however, require the introduction and simulation of additional pools. This effort would be justifiable only if more long-term decay data were available to improve model parameterization. Such data are expected in the future from ongoing long-term decomposition experiments. 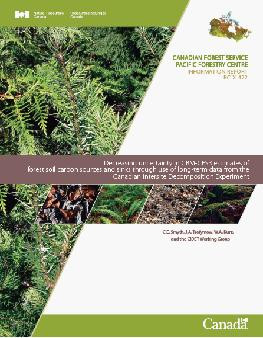