Founder group size is of prime importance in tree breeding programs. We determined whether sampling 20-plus trees for breeding in Allanblackia floribunda, a tropical forest tree species that has been recently enrolled in tree improvement program for fruit and seed production, would affect neutral genetic diversity and inbreeding level in both breeding and production populations. Using eight informative microsatellite loci, we: (a) assessed the nuclear genetic diversity of ten natural populations, and of the breeding population in the humid forest zone of Cameroon; (b) investigated temporal effective-size fluctuations in A. floribunda natural populations, with a view to identifying the role of past demographic events in the genetic structure of the studied species; and (c) tested the hypothesis that genetic diversity in a founder group of 20 individuals is not different from that existing in the wild. The eight loci were variable. High levels of genetic diversity (A=4.96; HE=0.59) and moderate differentiation (RST=0.061) were found within and among populations in wild stands. High genetic distances existed between populations (average chord distance = 0:2769 ± 0:00554). Eight of the ten surveyed populations showed signs of deviation from mutation-drift equilibrium, suggesting Pleistocene population bottlenecks and fluctuations in effective population size. Mantel tests did not reveal any relationships between genetic and geographic distances. A neighbor-joining dendrogram showed a population structure that could be explained by historical factors. The hypothesis tested has been accepted. However, a slight increase in inbreeding was observed in the breeding population. 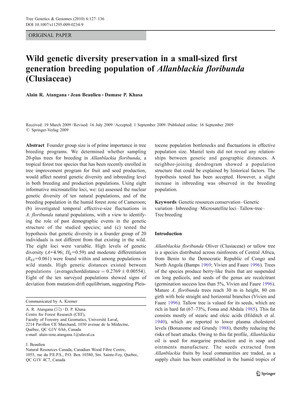