A study was designed to isolate potentially pathogenic, endophytic fungi of red alder (Alnus rubra). Apparently healthy leaves and 2- to 3-year-old twigs were collected at three and eight sites, respectively, surface sterilized, cut into small pieces, and incubated on 2% malt extract agar. Ninety percent of the leaves and more than 80% of the twigs were colonized by endophytic fungi; 40 different fungi were isolated and identified. Fungi previously recorded as plant pathogens dominated the endophyte community of leaves (Gnomonia setacea, Gnomoniella tubaeformis, and Septoria alni) but were only minor components of the fungal population of twigs (Melanconis alni and a Nectria species). Abundance of each fungus species and the species composition depended on the plant organ sampled and collection site. In twigs, three main types of endophyte associations occurred among sites: the first was dominated by the unidentified "Black Mycelium 2," the second by Phomopsis sp. 2, and the third by Ophiovalsa suffusa, Pezicula livida, and Phloeosporella sp. The endophyte community of leaves was dominated by G. setaceae except at one site where G. tubaeformis was the predominant fungus. 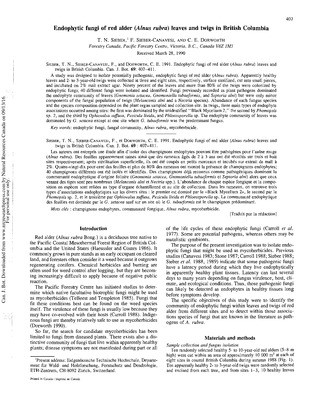