Current interest in taxol, the promising anti-cancer agent isolated from yew bark, has focused attention on yew trees. The demand for raw material has raised questions about the sustainable development of the resource and threatens the survival of natural stands of yew in the Pacific northwest. References collected here provide a basis for new studies of taxol production, and the genetic and ecological conservation and regeneration of yews.

Studies on yew during the 1970s addressed three diverse problems: 1) toxicology and diagnosis of yew poisoning in livestock 2) cultivation and horticultural use of Taxus species and 3) ecology and the distribution of Taxus species in nature. These studies were the foundation of our knowledge of the phytochemistry, silviculture, and biology of yews.

In the 1980s, concern over the damaging effects of air pollution on ecosystems brought the three research initiatives together. The yew was studied because its longevity makes it an excellent long-term indicator of change. The previous phytochemical work enabled the characterization of toxic substances in the plants, horticultural studies provided information on the silvics of the species, and inventories enabled an assessment of pollutant effects on plant survival and distribution.

This bibliography lists over 300 references published between 1970 and 1991 and includes many foreign language articles. It is divided into eight sections, each of which is subdivided into subject areas. Citations are arranged chronologically to present a historical perspective. Keywords are included where possible. The bibliography is followed by a list of Taxus species and varieties and an index of articles pertinent to the Pacific northwest and the taxol issue. This bibliography will provide readers with a ready reference to two decades of research that will assist new investigations on the sustainable development of natural sources of taxol, the biology of this relatively little-known genus, the issue of Taxus species as an element of biodiversity, or other concerns. 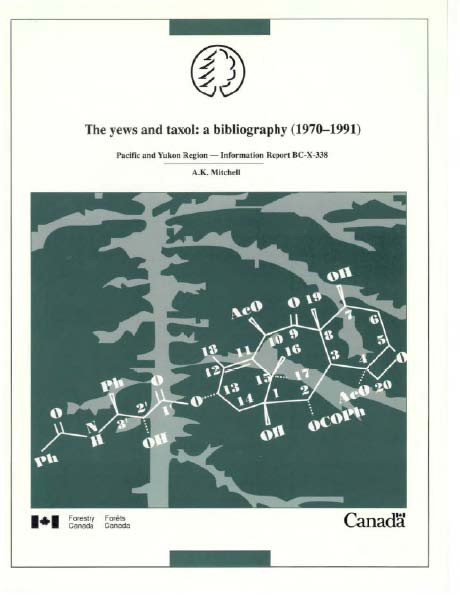