Mountain pine beetles from naturally infested lodgepole pine were marked with fluorescent powder in the laboratory, released in the field, and recaptured at lethal baited trap trees and in traps to study their temporal, vertical, and horizontal distributions and some effects of temperature and wind direction. Over 80% of the recaptured beetles were trapped within 3 days of release regardless of temperature and wind conditions; the proportion recaptured was directly related to heat accumulation above a flight threshold temperature of 16°C. Near the release point, the greatest numbers of marked beetles were trapped at a height of 3 m, and captures declined above and below this point. It was estimated that only 0.2% of the marked beetles dispersed above the stand canopy. In a limited experiment, no naturally emerged beetles were captured above the stand canopy in traps suspended from a large balloon. Captures from the four cardinal directions decreased exponentially with distance from the release point. Most beetles were trapped upwind and downwind from the release point. A simple model based on the proportion of beetles trapped at a given (reference) distance from the release point was developed to estimate the proportion of released beetles which could be trapped at any distance. 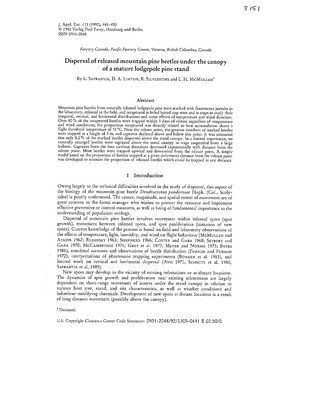