Newly planted seedlings are more likely to be severely damaged by the black army cutworm if they have been planted in certain biogeoclimatic zones on dry sites burned within the 12 months prior to moth flight. Defoliation inhibits root growth and reduces the establishment of new roots into the soil. This causes moisture stress in the seedlings; mortality or prolonged growth loss can result especially if the moisture stress is compounded by other factors such as a summer drought, the planting of seedlings in ash or rotten wood, or deformation of the roots during planting.

Significant damage can be avoided through proper management by careful monitoring and planning. Susceptible sites can be identified and mapped in advance. New populations can be detected by pheromone traps deployed on newly burned susceptible sites. Some sites with moderate cutworm populations may require on-site inspection to accurately assess the risk of severe damage to seedlings. Final plans and commitments for planting can then be adjusted to avoid or minimize long-term damage.

Seedlings should not be planted on infested sites if those sites are prone to drought. If feasible, planting should be delayed until after pupation, which usually occurs about June 15 at low elevations, and up to 3 weeks later at higher elevations. If delay of a few weeks is not feasible, planting should be delayed a year. A third choice is to continue planting and assess seedling damage after bud flush one year later. Dead seedlings, seedlings with dead terminals, and seedlings defoliated more than 60% should be replaced.

No precautions are necessary if seedlings are planted on good moist sites not prone to drought, or if the site is burned after September 15 and planting is completed the following spring. Even if the seedlings are subsequently defoliated, the long-term effect of defoliation on these sites is usually slight. 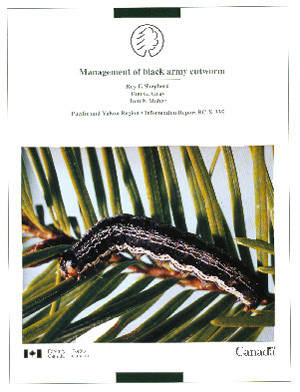