In the late 1970s, several intense rainstorms occurred on the Queen Charlotte Islands triggering many landslides. Some of these slides were associated with clearcut forest harvesting and several impacted directly on salmon-spawning streams. To defuse a growing conflict among resource users and managers, several government agencies developed and funded the Fish/Forestry Interaction Program (FFIP). This programme was initiated in 1981 with the first phase completed in 1986 and the second phase currently in progress. The paper summarizes findings and conclusions relating to the extent and severity of mass wasting and its impact on fish habitat and forest site productivity, the feasibility of rehabilitating damaged streams and forest sites, and the potential to reduce adverse impacts by better harvest planning and by employing alternative silvicultural and logging systems. 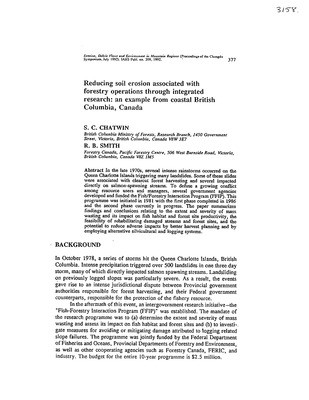