Question: In the boreal forest of eastern Canada, how does forest vegetation change in the sustained absence of fire?

Methods: Aerial photos from three different periods (1930, 1965 and 1987) were used to characterize changes in vegetation composition in 23 scenes of 200 ha. Time since fire, presence of secondary disturbances and data on soil and topographic variables were obtained. Ordination and clustering techniques were used to define compositional trajectories of change over the 57-yr period. These trajectories were further grouped into pathways based on compositional changes, time since fire and preferential deposit-drainage types.

Results: Among the 26 compositional trajectories, three successional pathways were distinguished. Two start post-fire succession with a dominance of intolerant hardwood. In one of these, this is followed by an increase in Abies balsamea, while in the second the importance of Picea mariana increases with time. In the third pathway P. mariana is an important component from the outset. In this pathway, we observed modest fluctuation in the relative dominance of P. mariana and A. balsamea and variation in stand structure.

Conclusion: The boreal forest vegetation of Eastern Canada is diverse and dynamic even in the absence of fire, notably under the influence of partial disturbances. Such disturbances can be associated with changes in composition or stand structure. The development of management strategies aimed at maintaining stand diversity by emulating a broader variety of partial and secondary disturbances should be encouraged. 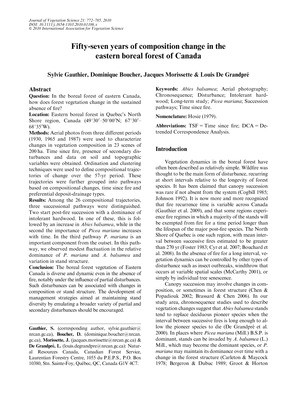