Climatic changes are predicted to significantly affect the frequency and severity of disturbances that shape forest ecosystems. We provide a synthesis of climate change effects on native bark beetles, important mortality agents of conifers in western North America. Because of differences in temperature-dependent life-history strategies, including cold-induced mortality and developmental timing, responses to warming will differ among and within bark beetle species. The success of bark beetle populations will also be influenced indirectly by the effects of climate on community associates and host-tree vigor, although little information is available to quantify these relationships. We used available population models and climate forecasts to explore the responses of two eruptive bark beetle species. Based on projected warming, increases in thermal regimes conducive to population success are predicted for Dendroctonus rufipennis (Kirby) and Dendroctonus ponderosae Hopkins, although there is considerable spatial and temporal variability. These predictions from population models suggest a movement of temperature suitability to higher latitudes and elevations and identify regions with a high potential for bark beetle outbreaks and associated tree mortality in the coming century. 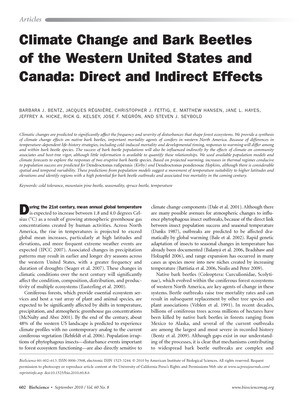