• Premise of the study : The genetic structure of jack pine (Pinus banksiana Lamb.), a North American boreal conifer with large longitudinal distribution, was investigated to test for the possible existence of a genetically distinct lineage in the Maritimes region in northeastern North America, which could be indicative of a mid-latitude coastal refuge during the last glaciation.

• Key results : The populations from the Maritimes region presented a unique mtDNA background characterized by very low diversity and the preponderance of a distinctive mitotype. The distribution of cpDNA diversity was not spatially structured, though three chlorotypes were restricted to the east.

• Conclusions : MtDNA data suggest that populations from the Maritimes region derive from a genetically depauperated north-coastal refugium. Contrastingly, the much higher geographical uniformity observed for cpDNA variation indicates that gene flow by pollen had been much more effective than seed gene flow at homogenizing population structure. 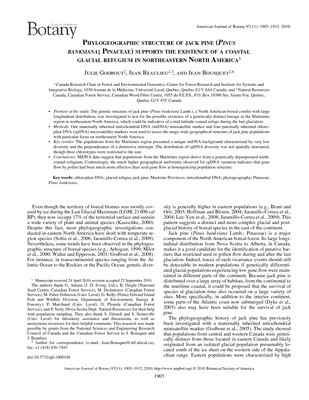