Canada’s forests play a significant role in the carbon cycle through the exchange of carbon dioxide with the atmosphere, by photosynthesis, which removes atmospheric carbon, and plant respiration and soil decomposition, which add carbon to the atmosphere. The net amount of carbon movement (flux) into or out of the forest determines its status as a source or sink (absorber). The boreal forest comprises close to 80% of Canada’s forest area, and is thought to be an important carbon sink for the atmosphere, as carbon is taken up by growing trees. Since the 1980s, the Canadian Forest Service has been tracking carbon stocks in our forests using inventories, and reporting on this information to the United Nations Framework Convention on Climate Change. In 2003 the Canadian Carbon Program (CCP) was initiated, to provide the scientific data needed to quantify the movement of carbon between the atmosphere and various Canadian ecosystems, including the boreal forest. Under this program, which is funded by the National Science & Engineering Research Council (see http://www.nserc-crsng.gc.ca) and the Canadian Foundation for Climate and Atmospheric Science (see http://www.cfcas.org), university and government researchers set up monitoring stations in various forest types across Canada, to measure carbon uptake and release. These stations are part of an international network of over 300 sites in North America, Europe and Asia that allow scientists to analyze the contributions of different geographical areas to atmospheric carbon exchange. Results from this research will lead to a greater understanding of the role of Canada’s forests and other ecosystems in the global carbon cycle, and how their status as a carbon source or sink can be affected by various forest management practices and climatic conditions. The data gathered will also be employed in international reporting to the United Nations about Canada’s forests and their role in the carbon cycle. 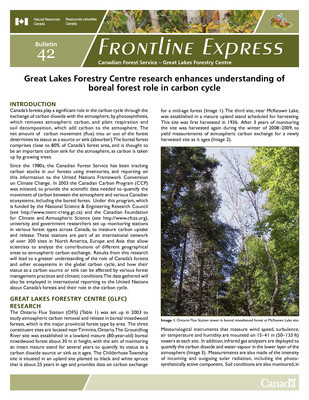