The Canadian Forest Service’s Shawnigan Lake Project (SLP) main experiment was established in 1971–1972 to study the effects of fertilizing and thinning 24-year-old coastal Douglas-fir (Pseudotsuga menziesii [Mirb.] Franco) on a dry and nutrient-poor site (Site index 25 m at 50 years breast height age). It consists of three levels of thinning and five levels of fertilization, including the controls. The thinning levels (single entry) are: no thinning (T0), 1/3 basal area removed (T1), and 2/3 basal area removed (T2). The fertilization levels are: no fertilization (F0), application of 224 kg N/ha once (F1) or thrice (F1-1-1), and application of 448 kg N/ha once (F2) or twice (F2-2). The second application of fertilizer was done in 1981 and the third in 1990. Each thinning and fertilization treatment combination consists of two or four 0.0405-ha plots, totalling 36 plots. These plots were remeasured nine times over a 32-year period. Plot average and per-hectare tree data were pooled by treatment and analyzed separately for the entire stand and crop trees. Crop trees (or prime trees) represented the largest 250 trees per ha at time of treatment that were still alive 32 years after treatment. The treatment effects were compared using the fixed-effects model, for 32-year periodic annual increment (PAI) and yield 32 years after treatment, for various stand attributes. The stand attributes included quadratic mean DBH (QMD), arithmetic average height (AAH), and total and merchantable volume. The analysis results were generally consistent with our expectations. The results showed the following:

These 32-year results added to the information base supporting informed forest management decision-making in coastal British Columbia, and contributing to the Canadian Wood Fibre Centre’s initiative of promoting research on the effect of silviculture and stand dynamics on fibre attributes. These results may be extended to similar dry and nutrient-poor sites on the coast and will also contribute to our knowledge of the response of coastal Douglas-fir stands to thinning and fertilization. To confirm the conclusions to date, and to provide more complete plot histories, continued remeasurement of the SLP plots is recommended. 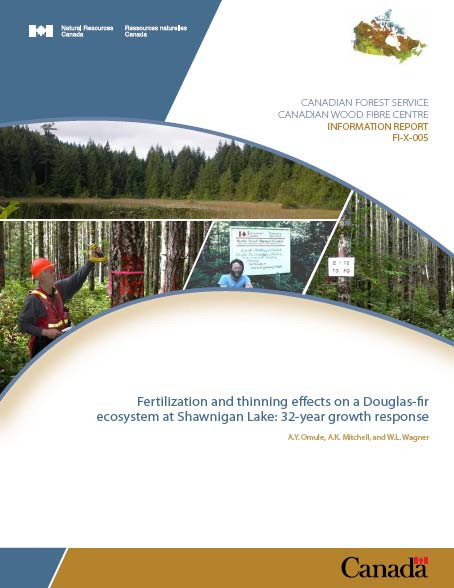