The present mountain pine beetle (MPB) outbreak has become the most extensive ever recorded in the province of British Columbia. As of 2010, the cumulative area of provincial Crown forest affected was roughly 16.3 million ha. Due to the widespread abundance and commercial value of lodgepole pine, an aggressive program of salvage harvesting has been initiated, resulting in elevated cut rates in many of the areas affected by the outbreak. The MPB disturbance is located within the British Columbia Interior, an area characterized by a snow-dominated hydrologic regime. Within this regime forests play an important role in regulating the terrestrial water cycle, controlling how rain and snowfall are partitioned between interception, evaporation, snow and soil storage, runoff, and streamflow. Historically, most forest hydrology research into the effects of forest disturbance has been based on the impacts of clearcutting. The distinguishing feature of this MPB epidemic is that, despite its vast and unprecedented size, it is a biotic disturbance that does not necessarily result in complete stand loss. Unlike a stand-replacing disturbance (such as clearcutting or severe wildfire), even pure pine stands can retain a hydrologically functional secondary structure following beetle kill. The presence of such multi-storeyed secondary structure can mitigate the effects of beetle-kill. This issue compels better quantification of the impacts of a non-stand-replacing event on hydrology, and an improved understanding of how the hydrologic cycle is affected along a gradient of canopy loss and tree mortality. The following synthesis is a review of research examining the effects of large-scale MPB-related disturbance conducted predominantly over the past five years. The emphasis is on research that explicitly examines the impact of beetle kill (or biotic disturbance in general) and the cumulative effects of largescale salvage harvesting operations in response to beetle kill. In general, forest disturbance has been found to increase snow accumulation and melt, reduce interception loss and evaporation, and increase runoff and streamflow. There is a general consistency in the results, which show that biotic forest disturbance has a hydrologic impact intermediate between that of healthy forests and clearcut salvage harvesting. However, results are site specific and exceptions do occur, introducing variability and uncertainty in potential hydrologic impacts and making prediction difficult. At the basin scale, salvage harvesting is expected to increase water yield. Both beetle kill and salvage harvesting have the potential to affect the peak flow regime. When the impact is sufficiently large, the peak flow regime is adjusted such that for a given frequency of occurrence the magnitude is increased, and for a given magnitude the event becomes more frequent. Combined results suggest that beetle kill has a smaller impact on peak flow than the cumulative effect of both beetle kill and clearcut salvage harvesting. Research gaps remain; in particular, the ability to quantify the effects of secondary structure and stand deterioration and recovery over time is lacking. 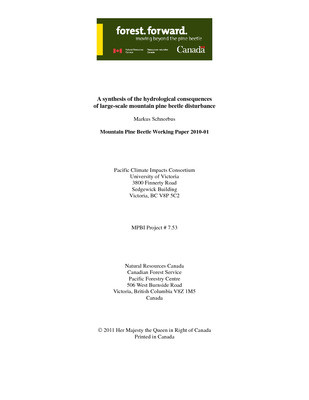