British Columbia is amid the largest recorded mountain pine beetle outbreak in North American history. To minimize timber losses, large-scale salvage operations are underway to utilize the merchantable pine. However, large-scale salvage operations can have negative impacts on a variety of forest values, including the potential to diminish mid-term timber supply opportunities. One option is to reserve stands with adequate advance regeneration for the mid-term timber supply. Another option is to salvage harvest dead trees in a way that protects the advanced regeneration. However, the health, vigour, form, and mortality rate of advance regeneration, through time, has not been well studied. To incorporate these stands into timber supply analyses and subsequent management decisions regarding reservation, mortality and forest health factors must be evaluated. We assessed the forest health of 90 residual stands over a range of stand types with varying lengths of time since attack by mountain pine beetle (MPB). Analysis of the forest health survey data showed that current damage from forest health agents was relatively low. Physical damage was the most common issue, but even in that case, the incidence ranged from < 1 to 5.5% of trees grouped by species. Forest insects and pathogens that were common in the overstorey, either at the time of sampling or before MPB mortality, have the most potential to cause future damage. These agents included dwarf mistletoe and root diseases. Both of these agents spread from overstorey to understorey and can intensify throughout the life of the stand. Foliar pathogens and insects were low in incidence and are not expected to increase over the next rotation. However, they have the potential to increase in severity with climate change and should be monitored closely. Tree ring analysis showed a strong release in growth of advanced regeneration that was timed with overstorey mortality. The magnitude of the response was related to the proportion of the overstorey that was pine compared to non-host species, and was not related to the species of understorey tree. 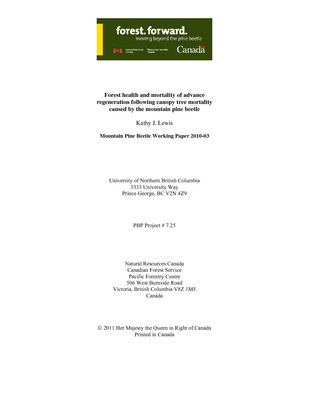