Data from a 7-year field study was analysed with respect to the effects of spruce windthrow, stumps, and other logging residue on variation in the following factors of spruce beetle populations: adult emergence, adult size and sex ratio, brood development, and brood survival. The mean date of emergence varied from the end of May to mid-June and the length of the emergence period varied from 26 to 57 days. Mean emergence date was not significantly affected by study site or host material. In combined samples for all years, there was no significant difference from a balanced sex ratio in 1-year-cycle adults by each combination of host type and study site, but there was significant female bias in 2-year-cycle adults. In both stumps and windthrow, the overall mean size (width of the pronotum) of beetles was significantly greater for 2-year-cycle beetles than for 1-year-cycle beetles, particularly in stumps (stumps: 2.20 vs. 2.65 mm; windfall: 2.45 vs. 2.59 mm), and was related to host quality. The first spring following attack, mean development index in stumps was significantly greater than in windthrow. In windthrow attacked during 1976, 5.4 and 0.7% of the broods developed on a 3-year cycle at the two study sites. At both study sites the percentage of 1-year-cycle beetles from stumps was significantly greater than from windthrow. Over the study period, 59% of all beetles emerged per year from stand edges plus logging residue, indicating the significance of harvesting operations in providing brood habitat for endemic populations. The large increases in population levels over the study period in stumps and windthrow at the two study sites did not result in increases in attacks on living trees. The results are discussed in relation to spruce beetle population dynamics. 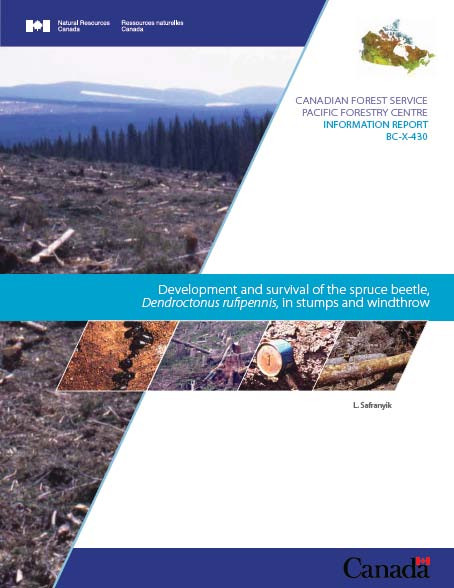