Outlier detection methods were used to scan the genome of the boreal conifer black spruce (Picea mariana [Mill.] B.S.P.) for gene single-nucleotide polymorphisms (SNPs) potentially involved in adaptations to temperature and precipitation variations. The scan involved 583 SNPs from 313 genes potentially playing adaptive roles. Differentiation estimates among population groups defined following variation in temperature and precipitation were moderately high for adaptive quantitative characters such as the timing of budset or tree height (QST = 0.189–0.314). Average differentiation estimates for gene SNPs were null, with FST values of 0.005 and 0.006, respectively, among temperature and precipitation population groups. Using two detection approaches, a total of 26 SNPs from 25 genes distributed among 11 of the 12 linkage groups of black spruce were detected as outliers with FST as high as 0.078. Nearly half of the outlier SNPs were located in exons and half of those were nonsynonymous. The functional annotations of genes carrying outlier SNPs and regression analyses between the frequencies of these SNPs and climatic variables supported their implication in adaptive processes. Several genes carrying outlier SNPs belonged to gene families previously found to harbour outlier SNPs in a reproductively isolated but largely sympatric congeneric species, suggesting differential subfunctionalization of gene duplicates. Selection coefficient estimates (S) were moderate but well above the magnitude of drift (>>1 ⁄Ne), indicating that the signature of natural selection could be detected at the nucleotide level despite the recent establishment of these populations during the Holocene. 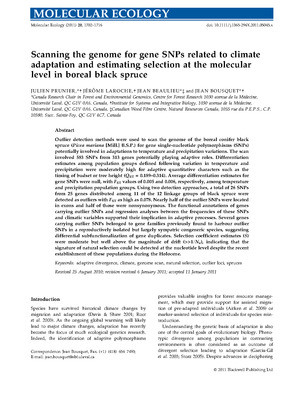