Globally, wildland fires burn several hundred million hectares annually. Close to 80% of fires occur in grasslands and savannas, while the remaining 20% are forest fires. Although not all fires are documented, it is known that over the last few decades fire activity has increased in many different global regions. This increase is due to a number of factors including climate change, rural-urban population shifts, and land use change, which all affect vegetation and fuel conditions. Every year, many fires around the world burn as uncontrolled wildfires, of which a small number have disastrous social, environmental, and economic impacts. It is particularly important to manage risk when fire may threaten people and communities. Any wildland fire that overwhelms fire suppression capacity to the point that human life, property, and livelihood cannot be protected is considered to be a disaster fire. To minimize the occurrence and impact of such fires, managers require early warning of extreme fire danger conditions, which provides them with time to implement fire prevention, detection, and pre-suppression action plans, including mobilization and pre-positioning of fire fighting resources to key critical areas. Early warning of potentially dangerous situations also allows for timely sharing of fire fighting equipment and personnel between different agencies, which is an important component of a fire management strategy. In Canada for example, the Canadian Interagency Forest Fire Centre (CIFFC) coordinates the sharing of fire suppression resources among all the provinces and territories, and between Canada and the United States, and other countries. Disaster fires occur in every global region and no individual country has the ability to control all fires every year. Greater international cooperation will help all countries to better handle the problems of increasing fire activity and disaster fires. In 2006, the United Nations (UN) Food and Agriculture Organization adopted a Strategy to Enhance International Cooperation in Fire Management to help address this issue. Around the same time, the UN Secretary General proposed the development of a Global Multi-Hazard Early Warning System under the auspices of the UN International Strategy for Disaster Reduction. As a result, the Global Early Warning System for Wildland Fire (Global EWS-Fire) is currently being developed by a consortium of international experts. 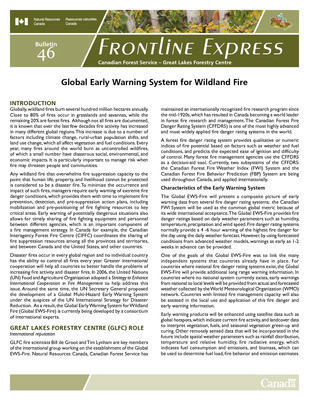